Please note: This page contains a selection of updates (in italics) as of September 2014, the original page is: 4 On the Mat

It is often asserted, simplistically perhaps, that ‘style’ or ‘class’ distinguishes a champion.

Maybe. I’ve known a few bowlers, very smooth, very classy-looking, but l wouldn’t count on them to produce the goods. On the other hand, there are others who look very ordinary, but who always get the results on the board. That they do so is usually the end- product of a lot of hard work and above all, concentration and application. Where it all pays off is on the mat.

When a bowler stands there ready to deliver, his mind is active and alert, check- listing what he is doing. Or, at least it should be. Yet, thousands of players merely step onto the mat, without thought and with almost indecent haste. Their bowls are launched with the same abandon. Is it any wonder that this vast army will never gain the rewards of good bowling?

Any student of the game will tell you that eighty per cent of the work of delivering a bowl smoothly and successfully is done before afoot is placed on the mat. The top bowler has thought out beforehand what he is going to do, and how. That ability does not come naturally. Learn it all now and you won’t have to break yourself of bad habits later on.

The first step is to place your feet correctly. They will determine the line your bowl will take up the green and to a great extent, how it will finish.

If you are left-handed, do in reverse all that follows.

l prefer to bowl from the inside of the mat. For a forehand shot I stand as near to the left-hand edge of the mat as the rules will allow 1 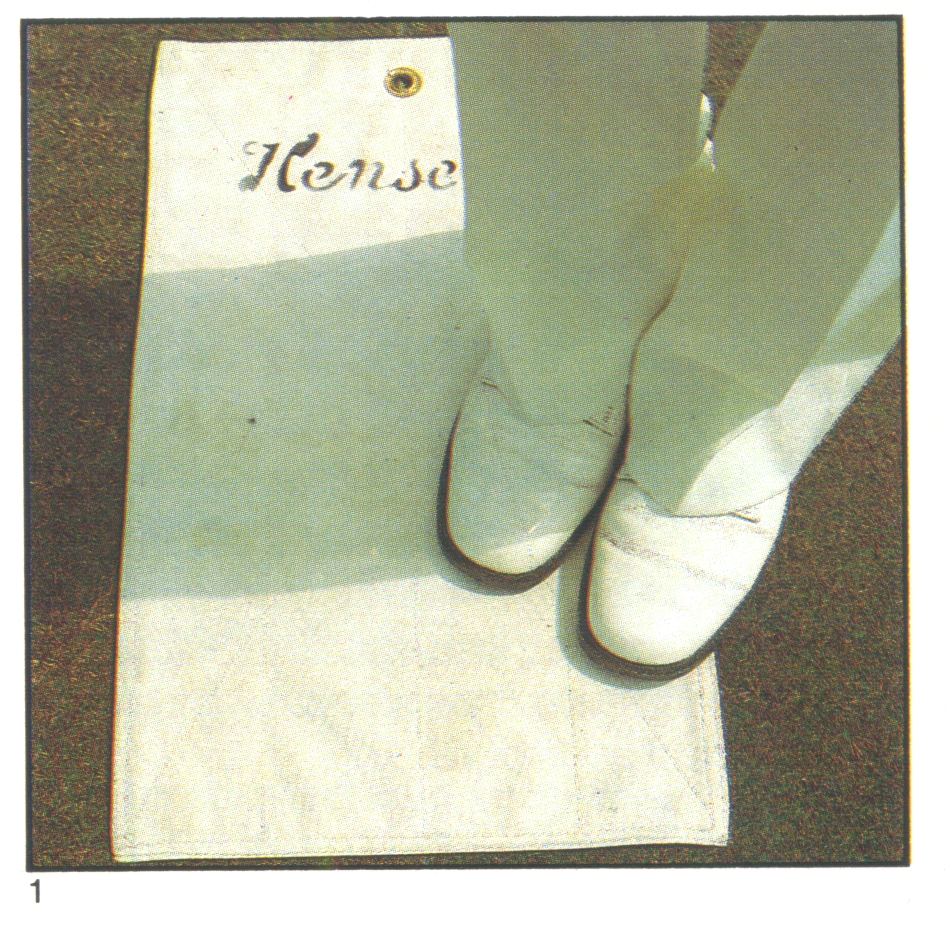 . Remember that prior to and during delivery one foot must be on or over the mat with neither foot behind the back edge. For a backhand delivery, the position is as near to the right-hand edge as possible. For both shots the right heel is against the edge of the mat. This allows you to deliver along the narrowest possible line of the 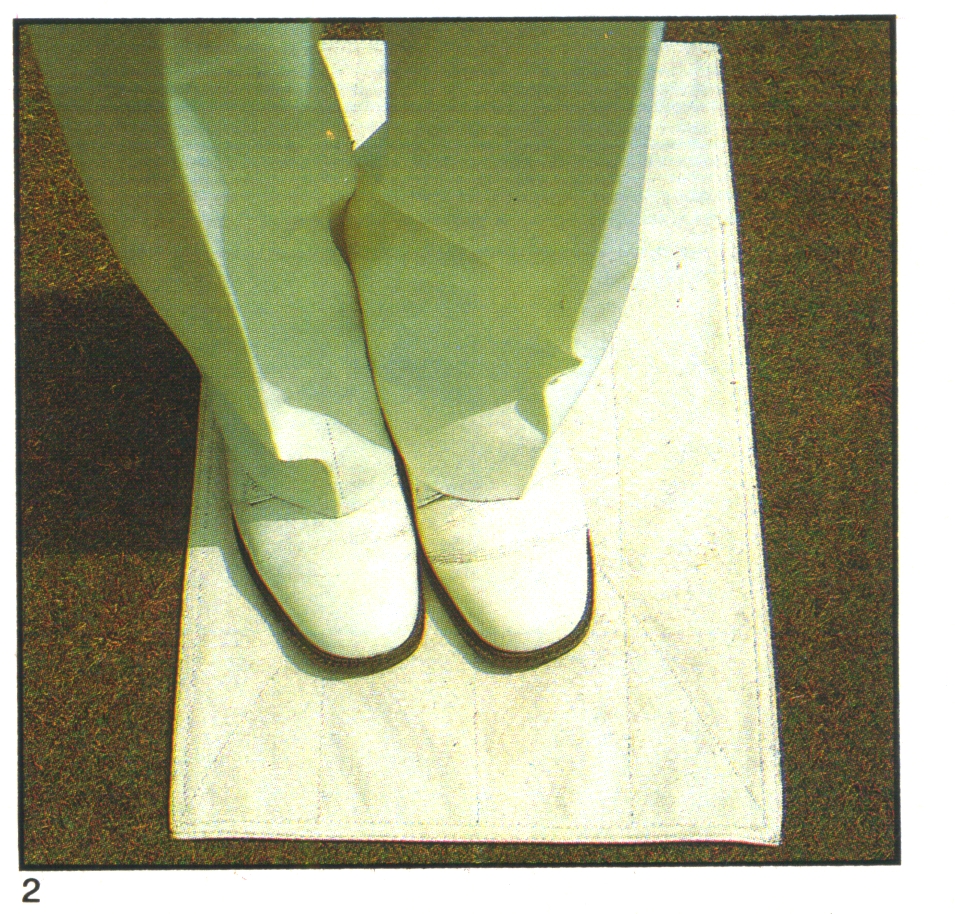 green. If, for example, your opponent is playing from the centre of the mat, then your line of delivery is about 15 centimetres (6 inches) inside his line. There are three advantages in this method.

A good example of the way in which this method can work, came my way a few years ago during a club championship match at Geelong, in Victoria. The green had not been cut for two days and had a fair growth of grass. l bowled inside my opponent’s line and, as the match wore on, the centre of the rink became more flattened. While I was able to consistently outdraw him, his bowls became too narrow, ran across the head or tracked into the new grass and stayed out. The result was that he became increasingly frustrated, lost his rhythm and the match.

In the next chapter, I’ll show you how to find your aiming point at the other end of the green. Right now we come to the second step in placing your feet correctly.

Watch a game of bowls at any club in Australia and you will see as many different styles on the mat as there are players. Some resemble a praying mantis, others appear to be suffering from indigestion, while many look so off-balance that a puff of wind would pitch them forward. 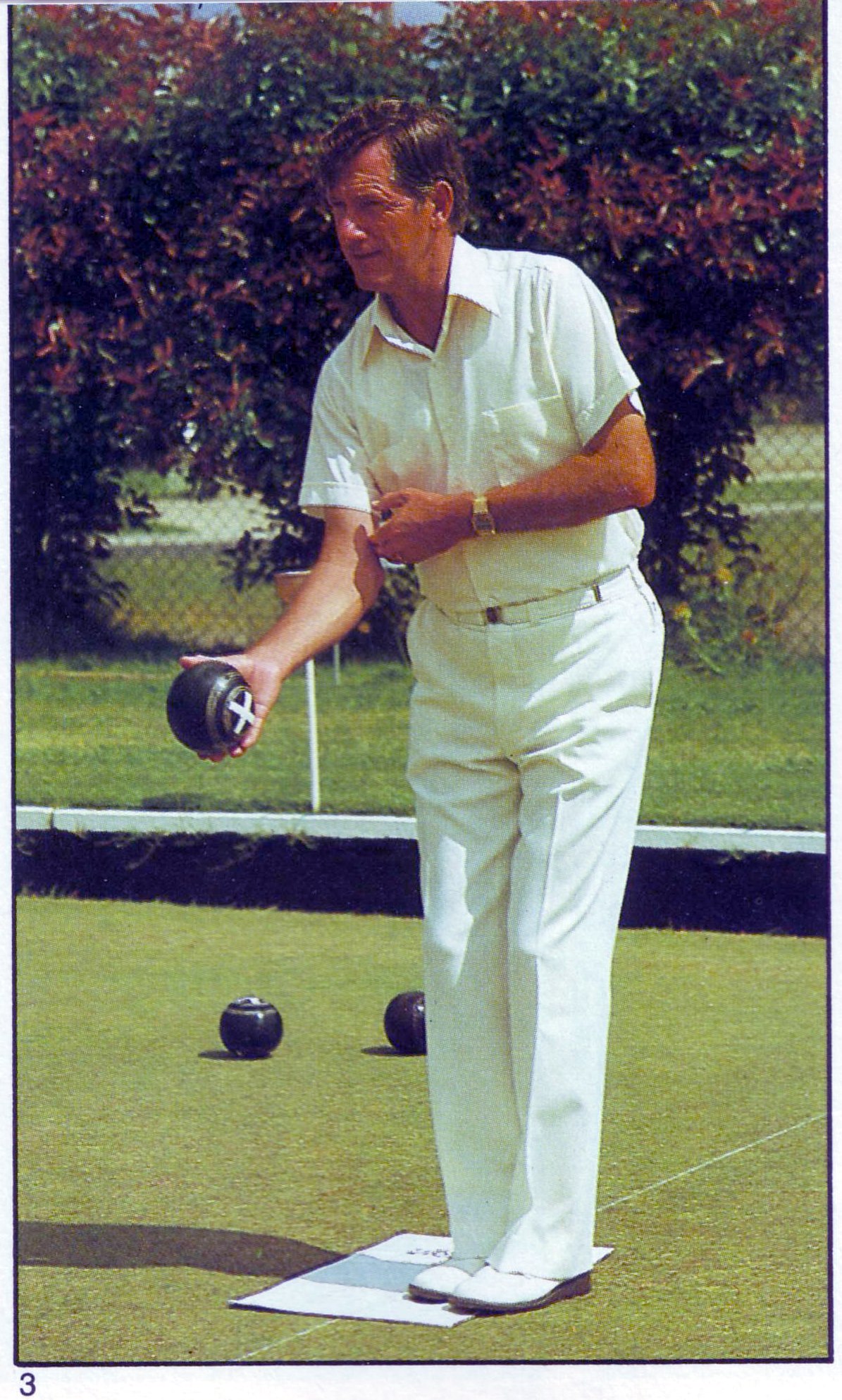 I’ve always been a supporter of the upright or athletic stance, but experience has taught me that you must bend at the waist. An angle of 70-80 degrees is sufficient 3. This starts you on your way down with balance, and enables you to get right behind the delivery. It may seem a little strange at first, but plenty of practice will make it second nature. 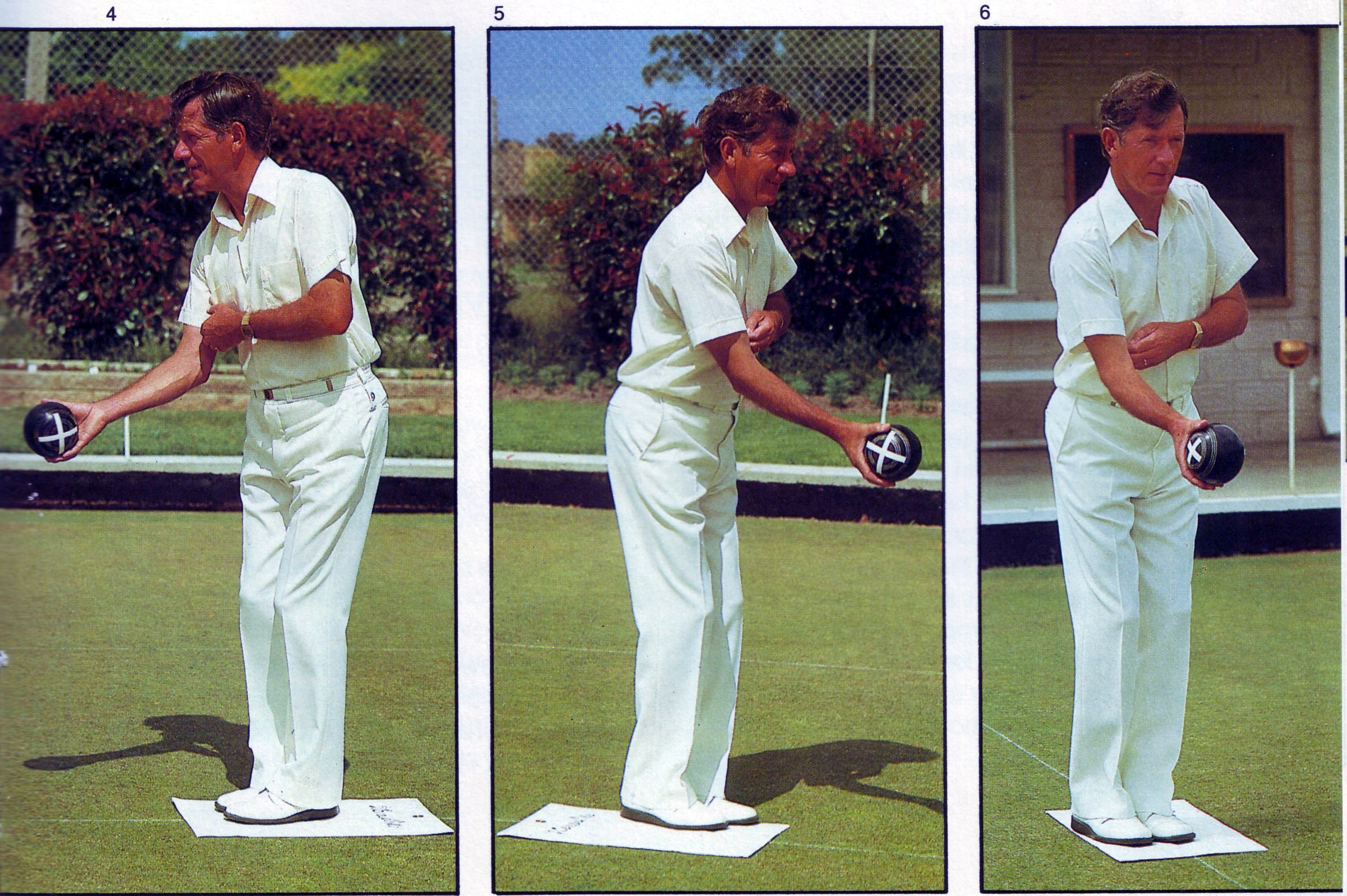 In addition, bend your knees a little, but keep them relaxed, maintaining more weight on the right foot than on the left 4. You are then better placed to transfer your weight in stepping forward, making for a smoother delivery.

Now check to see that your shoulders are square 5. They’re not? Well, there’s a simple way to ensure that they are square, facing your line of delivery.

Some coaches advocate that you steady the bowl with your free hand. I don’t; I believe this tends to drag your left shoulder out of line just before delivery. My approach is to use my left hand to steady my bowling arm 6; touching near the elbow, yet still enabling the shoulders to remain square. Over the years, I’ve noticed that other top bowlers use the same or similar techniques, such as placing their left hands on their left knees. Whatever method they use, their shoulders remain square.

Early in my career I developed a bad habit, one that haunts a large percentage of bowlers. Instead of holding the bowl out to the side of my body, giving me a clear swing, l held it straight out in front. This meant the swing had to follow an arc to get around my body, resulting in inconsistent deliveries. So I devised the technique of pushing my right elbow out with my left hand to a point where it was clear of my body. It now seems to have become a trademark.

Clearly, when it comes to putting together all parts of your stance, each is just as important as the other. One cannot work properly without the others, and the final component, which takes you to the point of delivery, concerns what is known as “elevation”.

Briefly, this means the position of your bowling arm. Look again at the photographs of my stance and you will notice that the arm is slightly below a line parallel with the ground. With the bowl starting the backswing from this height, l will have the correct amount of momentum to deliver the bowl to the speed of that particular green.

On a slow or heavy surface or on a long end, you have to propel the bowl much faster than you would on a fast or slick green. To do this you elevate your arm so that a natural swing will take your bowl back further and then forward faster.

On a fast green or a short end, you need far less effort, so the arm is held at waist height or lower. Finding the exact position is a matter of judgement and experience, both of which you can gain only by constant practice and play on all types of greens.

You are now ready to get that bowl moving. The action necessary is a  natural follow-on to the stance you have taken up on the mat. The first few thousand deliveries will need all your concentration. After that the delivery will be completely natural.

There are two essentials:

Rhythm is produced by co-ordinating your step forward with the start of your backswing 7A. Remember that in your stance, there should be more weight on the right foot than on the left, so that your weight will transfer smoothly 7B. I tend to step later than most but it doesn’t concern me as it enables me to transfer weight later and get more body weight into the shot. Move the left foot forward and place it firmly and flatly on the ground 7C. The length of the step should be about that of a normal walking pace: 75 centimetres or 30 inches. Anything shorter will cramp your style and delivery; anything longer and you’ll overbalance. As you start moving your foot, you begin moving the upper half of your body down and the arm back, all in one movement 7D. The arm comes back to a point between 30 and 40 centimetres (12 to 16 inches) behind your leg 7E. The entire action must be deliberate, not jerky. Sometimes you may
have to quicken it up on a heavy green, slow it down on a fast green. Above all, be smooth. On the forward swing the bowl is released about 20 centimetres (8 inches) in front of your left foot. At that point, your right knee will be almost touching your left ankle and about 10 centimetres (4 inches) above the ground 7F. Your free hand should rest on your left knee. If you have done all that, then you know that you have got right down to the job and put the bowl to ground smoothly without a trace of bump or wobble. 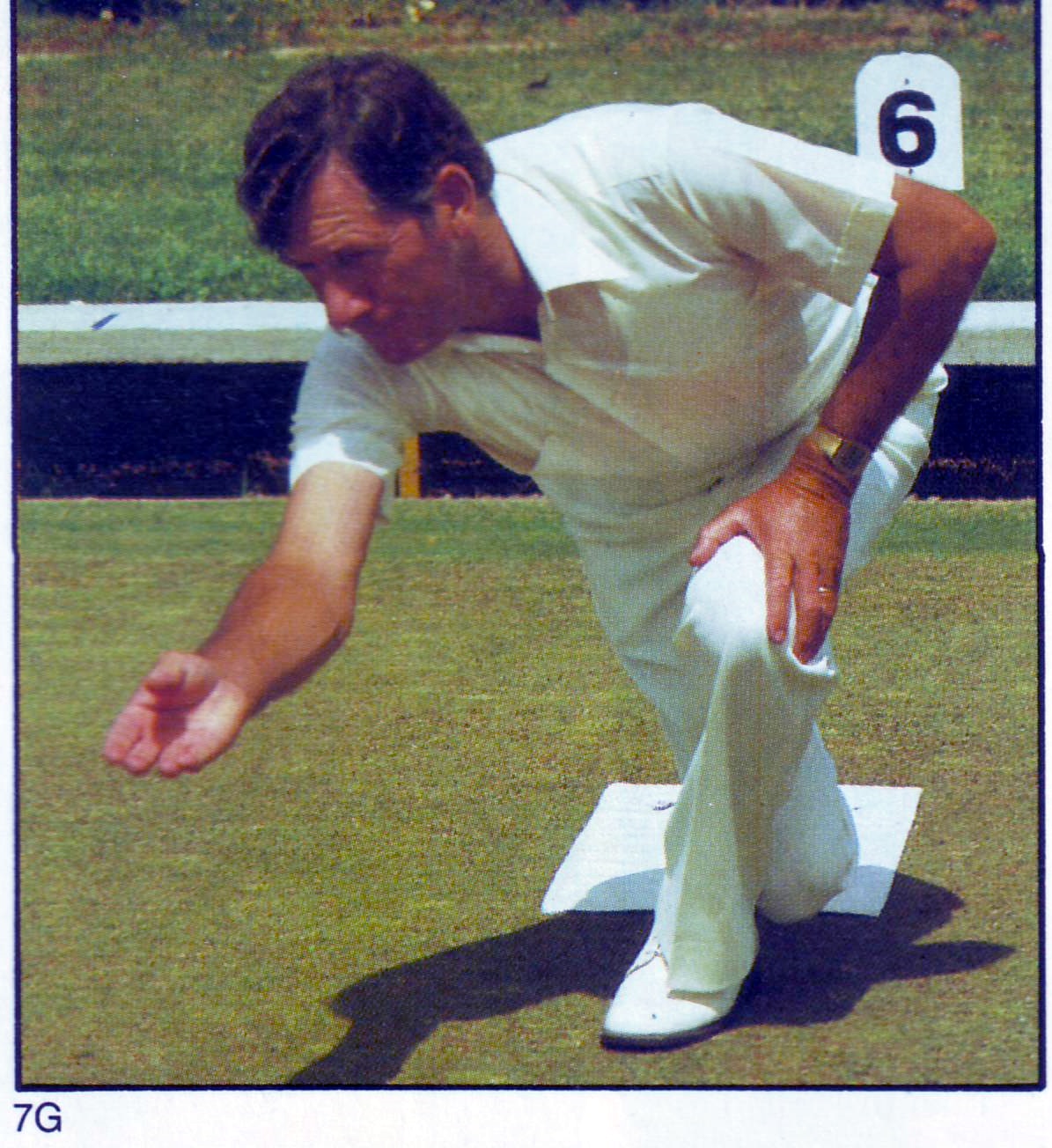 As you release the bowl, the arm continues to swing through the line, generating the pace needed for the shot played. It is almost guaranteed by pushing the arm out in an exaggerated follow-through 7G. Reach out, in this action, as if you were trying to grasp the aiming mark at the other end of the green. If you can feel a stretch in your shoulder, then you have carried out the follow-through correctly. Finally, end the whole movement with the palm of your hand facing upwards and stay there until the bowl has traveled a third of the way up the green. The action is always the same when you are drawing to the jack, whether the shot is on the forehand or on the backhand. On the latter, the only things you do differently are to stand facing your delivery line on the backhand, and to turn your bowl over so that the small centre disc is facing inwards. 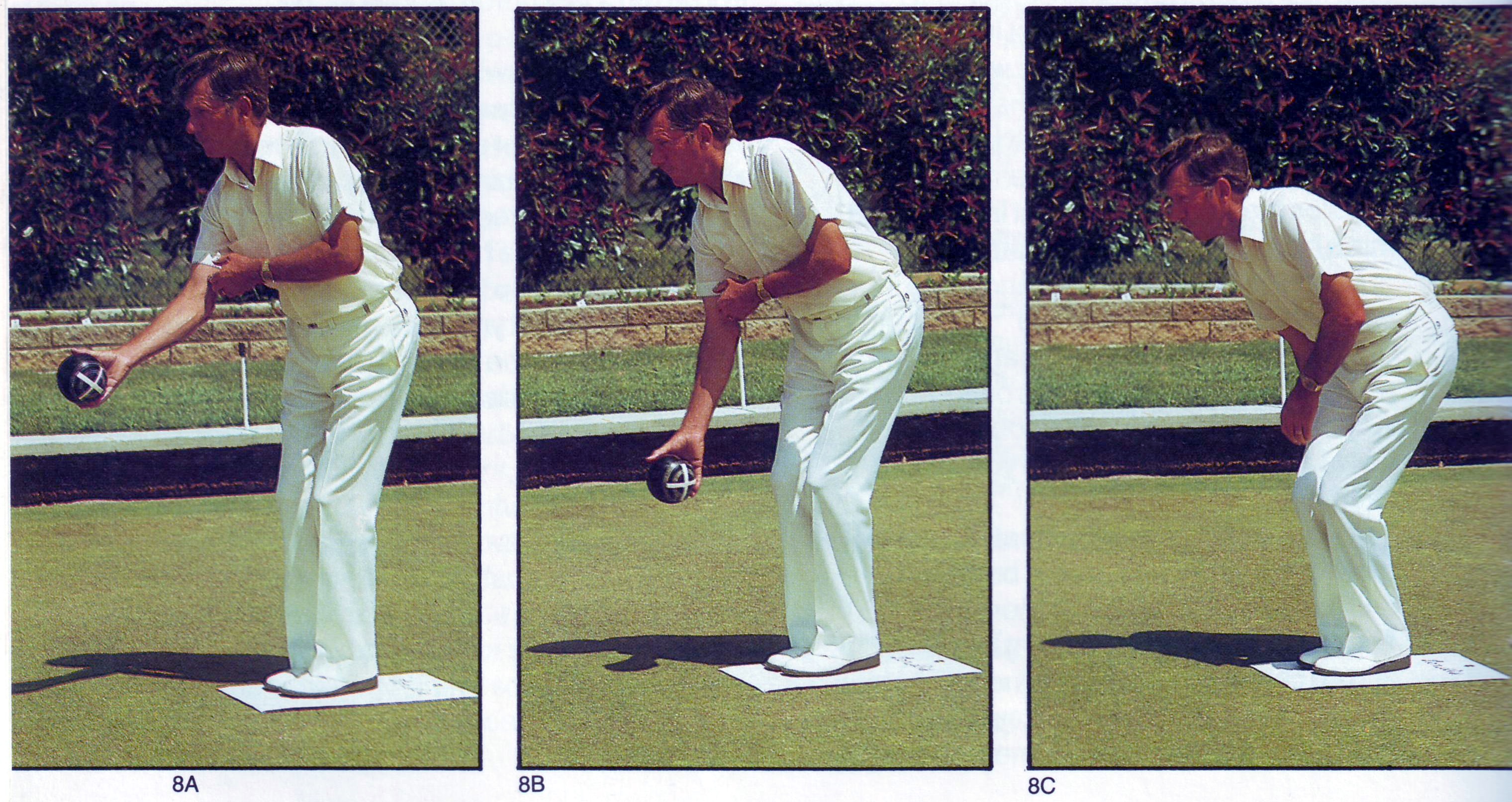 To emphasise all the points in the delivery action, the accompanying photographs are of the backhand draw shot 8. Be smooth, deliberate and have rhythm in your action and always finish with that exaggerated follow-through, palm upwards. The payoff will come at the other end of the green when your bowl comes to rest against that little white jack! 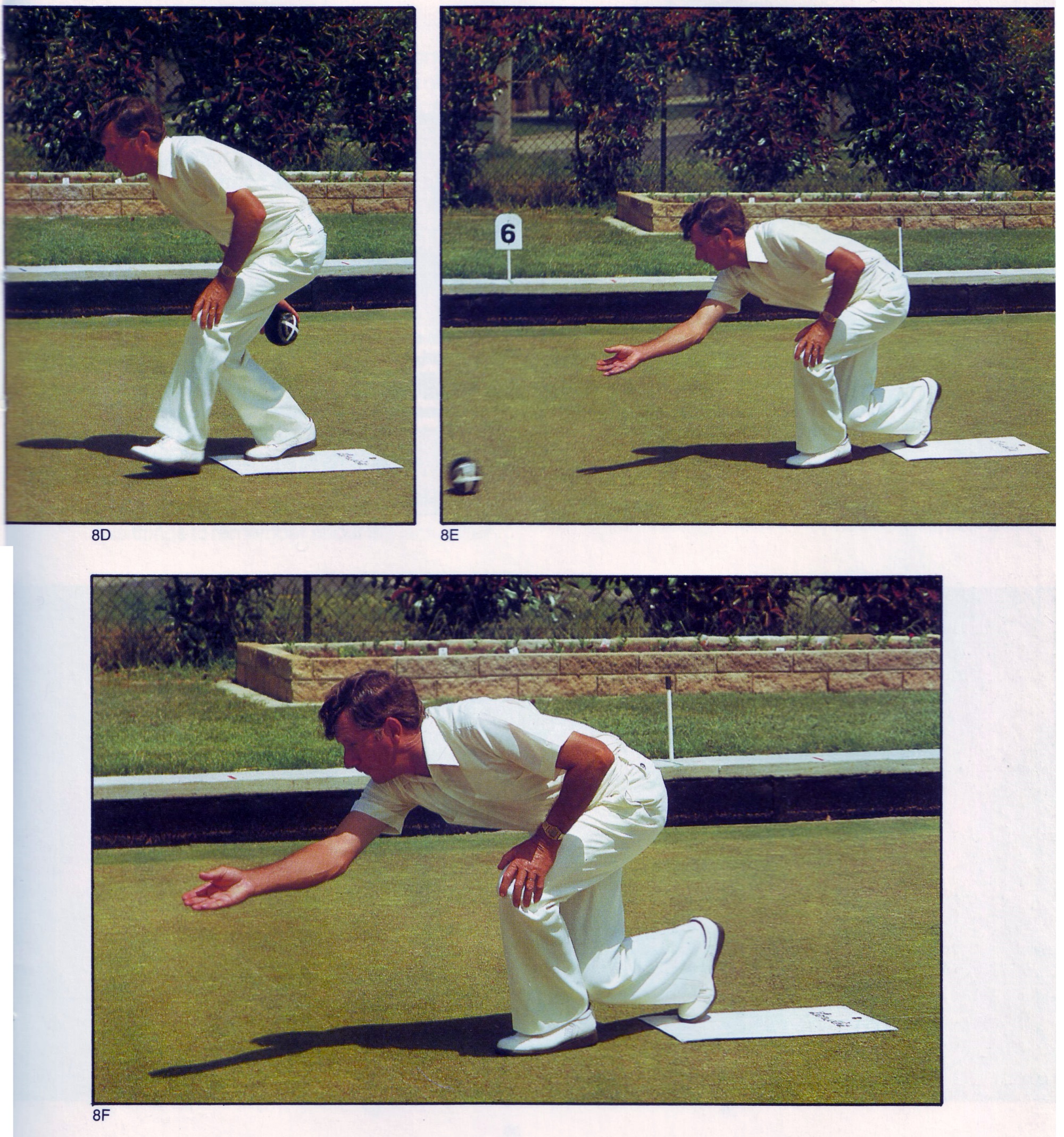