Please note: This is the original chapter from 1982, kept for posterity. For a current update see: 3. The Basics – updated

Of course, we all know that bowls is only a game.

One man crouches, swings his arm and sets in motion a bowl weighing 1 .5 kilograms. It travels over clipped grass in an arc for 24 metres or more towards a little white ball. His opponent then does the same. It can go on for hours.

Well, so much for the fiction. J. B. Priestley put paid to that sort of thinking in sport when he wrote that to describe Soccer as twenty-two hirelings kicking a ball is ‘merely to say that a violin is wood and catgut, that Hamlet is just so much ink and paper’.

It may be that lawn bowls started out as just a game. But it is now much more. It has soul, subtlety and character, although the basics certainly are simple enough.

Anyone wanting to take up the game, either for friendship, competition or both, has only to drop into a club. He will be made welcome and will probably be invited to join. But give the matter a little thought; select a club near your home or between work and home so that you can call in for regular practice during the week.

From the club secretary you will learn about the club, your part in it, what to wear and how much it will cost you to play. Having made the decision to join, the club coach or a senior player will be assigned to look alter you and show you the ropes, and more importantly, the rudiments of the game. They are relatively easy to grasp.

In singles the player who wins the toss of the coin, rolls the jack to the other end of the green. It must travel at least 20 metres. Then bowling alternately, each player delivers four bowls. The player whose bowl finishes nearest the jack, scores one. If his second is also closer than his opponent’s nearest, he scores two. And so on. In pairs each player delivers four bowls, in triples, three and in fours, two.

Having joined a club, where to from there? The Chinese, as always, have a proverb that fits the situation. It says that a journey of a thousand miles begins with but a single step. On the road to the top in bowls, you have just taken that step. The next is to outfit yourself for the encounters to come.

In choosing your weapons, go for the largest bowls you can most comfortably hold. They need less effort to deliver, which means a smoother swing and consequently, fewer problems at the other end. Also, in a measure for shot, the difference between winning and losing can be the difference between a large bowl and a small one.

Bowls come in sizes numbered O to 7, with just a centimetre’s difference between the diameters of the bowls at each end of the scale.

As a guide to the correct size for you, clamp your hands around the running surface of a large bowl1. The tips of your longest fingers should touch, as should your thumb nails. If they don’t, then try the next until you find the bowl size which suits. As I said, a large bowl is generally better than a small bowl; but if you have small hands, and feel at a disadvantage, there are ways to overcome the problem. One is to exercise your hands by pushing the top halves of your fingers and thumb of one hand against those on the other. In my first seven or eight years of bowls, I exercised like this constantly and increased my hand-span by two centimetres.

If your span is limited, another method is to experiment with the grips discussed later in this chapter.

The matter of bowls selection is really in two parts. We have dealt with size. Now let us look at weight.

Each size bowl comes in two weights: medium and heavy. The one you choose should again be governed by comfort, but remember these points.

Some bowlers have had success with different sets of bowls for different conditions. However I don’t believe in this approach and make it a rule to keep only one set in the house. It removes the temptation to chop and change. With two or more sets, it is too easy to find excuses for poor play by telling yourself that you used the wrong bowls on the day. Switching weights, I find, also creates difficulties in judging rhythm and finish.

To sum up, select the largest sized bowl you can handle comfortably.

If most of your play is to be on greens such as those in the south of the country, choose mediumweights; if in the north, on the faster greens, heavyweights could be the answer.
Which ever your decision, stick with it. 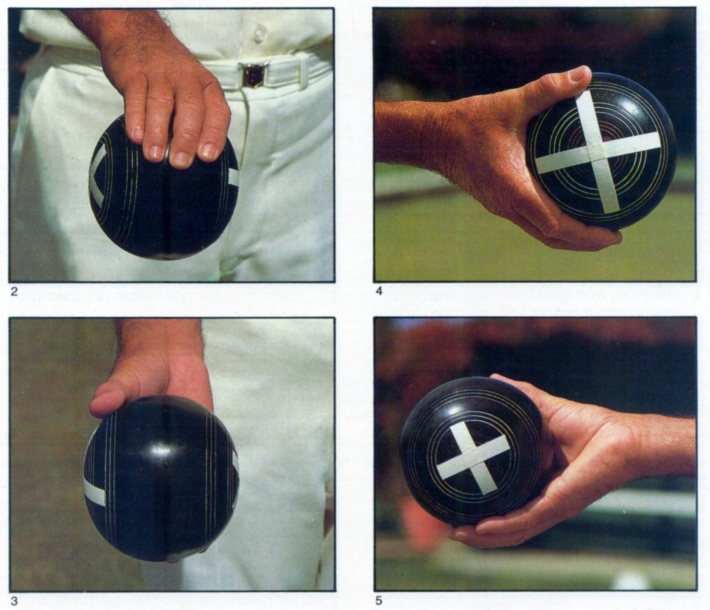 In most sports, your grip on your equipment governs how you will perform with it. Lawn bowls is no different and the starting point for a smooth, successful delivery is the grip on the bowl.

The enemy of the smooth delivery is the wobble. On a windy day, wobble can kill your line and draw stone dead within two metres of the bowl leaving your hand. On my bowls, you will notice white lines. I’ve painted them on the rings to tell me the instant after delivery if the bowl is wobbling. If it is, then the grip requires correction.

The right way is to place your middle finger on the centre of the bowl’s running surface2. Bring your other fingers close together alongside, if you can. I can’t because of a broken finger suffered many years ago. If you have a similar difficulty, do try to keep your fingers as close together as possible.

The thumb should be held in a comfortable position near the large ring on the bowl, but without exerting too much pressure3. Holding the thumb down hard only increases the likelihood of the bowl wobbling. The thumb is used more as a steadier. Now, with the bowl sitting on your four fingers,  4,5there should be a straight line from the running surface, up your arm to the shoulder. The wrist must not be cocked; for one thing it is not natural. The hand is not a straight extension of the arm, but normally points away at a slight angle. If you try to keep the hand straight, I promise you nothing more than bad deliveries, a tired wrist and a case of tension at the end of the day. A cocked wrist is against all the principles of relaxation, which is one of the secrets of winning bowls.

Always before a delivery, check your grip. If it is not right, step off the mat and start again. 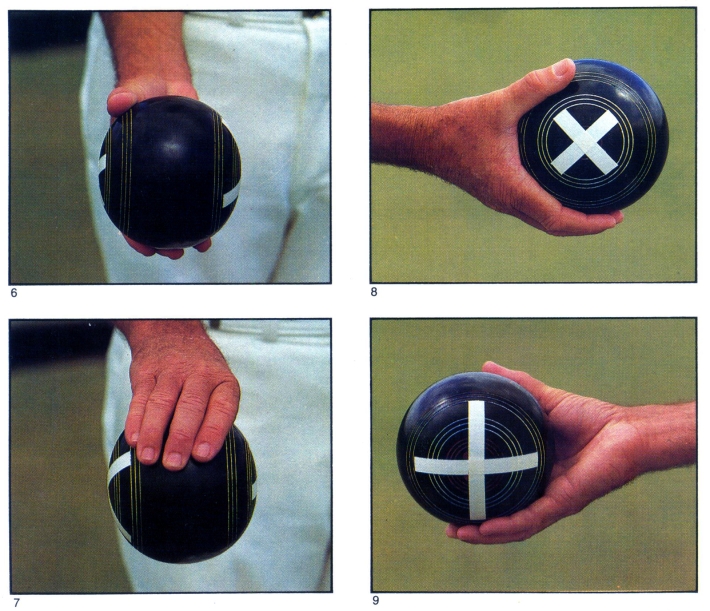 The backhand grip is fundamentally the same as the forehand. However, the thumb may have to be held in a slightly different position because of the change in the bowl’s bias from one side to the other6,7. Bias, by the way, is created during the manufacturing process by making the bowl near-elliptical. Which ever hand you are bowling, the small identifying disc must be facing the inside. For identification, my bowls here carry a small cross for the bias side8, a large cross on the other9.

Whether backhand or forehand, the same basics apply. However, as not everyone’s hands are the same, you may have to experiment a little to adapt the grip to your hand. The critical point is to ensure your grip is fundamentally correct so that it does not produce a wobble. Sometimes there can be an advantage in a wobble, in that it will stand the bowl up straighter and prevent the bias from taking hold until much later in the run. The problem is in trying to produce the same amount of wobble with every bowl. Consistency is the name of the game, and I defy anyone to be both consistent and a champion if their bowls wobble.

The grip which I have outlined above is essentially conventional- good for most playing conditions found in Australia. It gives you a chance to produce smooth, well-delivered bowls on most surfaces — bowls sent down with the correct amount of touch, judgement and sensitivity.

With the conventional grip you are better able to cope with differently-paced greens. On the faster surfaces, where touch is required, you can slide the bowl to the end of your fingers; or push it right back into the palm for slower greens where the need is more for judgement than touch.

However, there are two other grips which you should know about.

1. THE CLAW: can be used by a small- handed player who wants to use a larger bowl than normal. Instead of the conventional placement of the middle- finger on the centre of the running surface, your middle and forefingers form a ‘V’, their tips being spaced equi-distant over the running surface. The thumb and other fingers are placed where comfortable.

2. THE PALM: is handy for slow greens and wet ones. You gain additional power to push the bowl up the green by cupping it. As with the conventional grip, the middle finger is on the centre of the running  surface. The other fingers are spread a little more, to make a cup, and the thumb is held low, usually over the identification disc. Be warned, however, that with the ‘palm’, it’s easy to lose control over the bowl in the backswing, and the grip should be confined to those using a ‘push’ delivery.

These two grips are popular in Britain, but in Australia I prefer the conventional grip and its slight variations because of all-round usefulness on all greens, but more particularly because it helps to prevent that old enemy, the wobble.

You have your bowls and now you know how to grip them. Put the two together and practice at home, just gripping the bowl and getting the feel of it.

At the moment you’re at the bottom of the bowls world, looking up, your feet poised to step onto the mat.